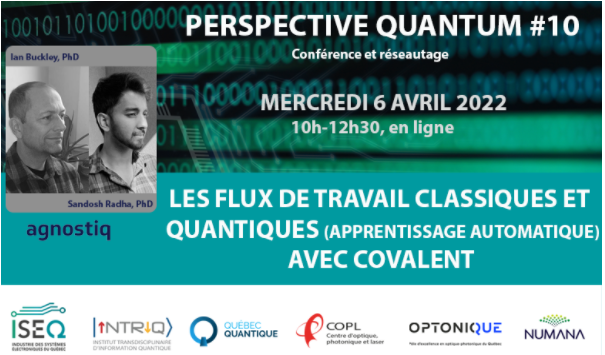 Workflow orchestration tools are widely used to optimize and organize computations in the data science and machine learning industries. Covalent[1] is a new open-source Python tool which extends these principles to the academic community, with the goal of making computational experiments scalable, manageable, and reproducible. In this talk, we’ll discuss general principles of workflows and then focus on how Covalent is applied to scientific calculations in a quantum machine learning tutorial.

Santosh holds a PhD in theoretical physics from Case Western Reserve University, where he initially started working on massive gravity and then moved to condensed matter physics. His research was to theoretically and computationally understand the topological effects occurring in quantum systems as a result of "knotted" wave functions in both interacting and non-interacting fermionic systems and its impact in lower dimensional entanglement. Apart from these, he is interested in a lot of domains, particularly in the intersection of mathematics, Physics, Computer Science and music.

In collaboration with ISEQ, COPL, Québec Quantique, Optonique and NUMANA, INTRIQ invites you to attend on April 6th to the 10th webinar of the Perspective Quantum series with Mr Santosh Radha and MrIan Buckley of the Toronto based Agnostiq. They will present Getting Started with Hybrid Classical and Quantum Workflows withCovalent.‍

Schedule :
10:00 AM - Networking
10:30 AM - Opening remarks by Nicolas Godbout, Professor at Polytechnique Montreal and Director of INTRIQ
10:35 AM  - Getting Started withHybrid Classical and Quantum Workflows with Covalent
11:25 AM - Closing remarks
11:30- 12:00 -Networking

Workflow orchestration tools are widely used to optimize and organize computations in the data science and machine learning industries. Covalent[1] is a new open-source Python tool which extends these principles to the academic community, with the goal of making computational experiments scalable, manageable, and reproducible. In this talk, we’ll discuss general principles of workflows and then focus on how Covalent is applied to scientific calculations in a quantum machine learning tutorial.

Santosh holds a PhD in theoretical physics from Case Western Reserve University, where he initially started working on massive gravity and then moved to condensed matter physics. His research was to theoretically and computationally understand the topological effects occurring in quantum systems as a result of "knotted" wave functions in both interacting and non-interacting fermionic systems and its impact in lower dimensional entanglement. Apart from these, he is interested in a lot of domains, particularly in the intersection of mathematics, Physics, Computer Science and music.